You are here: Home / We Wander the Battlefields 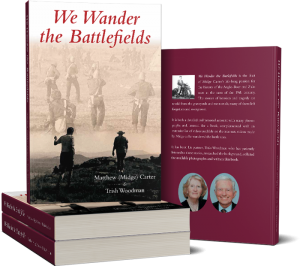 We Wander the Battlefields is the fruit of Midge Carter’s life-long passion for the history of the Anglo-Boer and Zulu wars at the turn of the 19th century. The stories of heroism and tragedy are retold from the graveyards and memorials, many of them left forgotten and overgrown.

It is both a detailed and personal account with many photographs and, unusual for a book, complemented with an extensive list of videos available on the internet, videos made by Midge as he wandered the battle sites.

It has been his partner, Trish Woodman who has patiently listened to these stories, researched the background, collated the available photographs and written this book.

If you would like to order the 272 page colour printed book for AUD$35 plus package and posting, please email Trish Woodman at trishw23@iinet.net.au

To our military history friends.

Before Midge died on the 23 July 2016, we published our book We Wander the Battlefields. I am keen to continue to promote the sales of the book, because as long as people are reading it he will be in their mind. There is also a DVD copy which is read on your computer and allows you to enlarge photos.

We Wander the Battlefields concentrates mainly on the Zulu and Anglo-Boer Wars and is in two parts. The first has anecdotes about Midge’s experiences, and odds and ends that we have discovered. As you probably know, Midge has been wandering around South African battlefields and cemeteries for more than 60 years and this led to him meeting interesting people and having some fascinating experiences. He always had a camera with him, so he has photos of places that are difficult to access now, monuments and graves that have fallen into disrepair or have been replaced, and of characters long gone. He has given more detailed descriptions of some lesser known battles such as West Australia Hill, Itala and Doornkraal/Bothaville (the action where the gun at the South African memorial in King’s Park, Perth, was won).

Since the 90s he has also had a video camera, so along with the printed entries in the book we have video clips on YouTube to complement them. That means, for example, that after you have read about his adventures on Spioenkop you can wander around there with him. You can see more than 100 of these clips that I extracted, by Googling Battlefield Wanderers (there are some of other wars too). I have been with him on four trips to South Africa, adding up to 10 months, meeting long time friends and exploring with him.

The second part of the book has photos of gravestones and monuments that we found fascinating, with full inscriptions. We translated these from Afrikaans where needed and added stories about some of the names on those stones The book is anecdotal, is not academic or full of statistics, but introduces the more human side of war and includes the type of information you won’t find elsewhere..

We would be grateful if you would tell any of your friends and groups who may be interested.