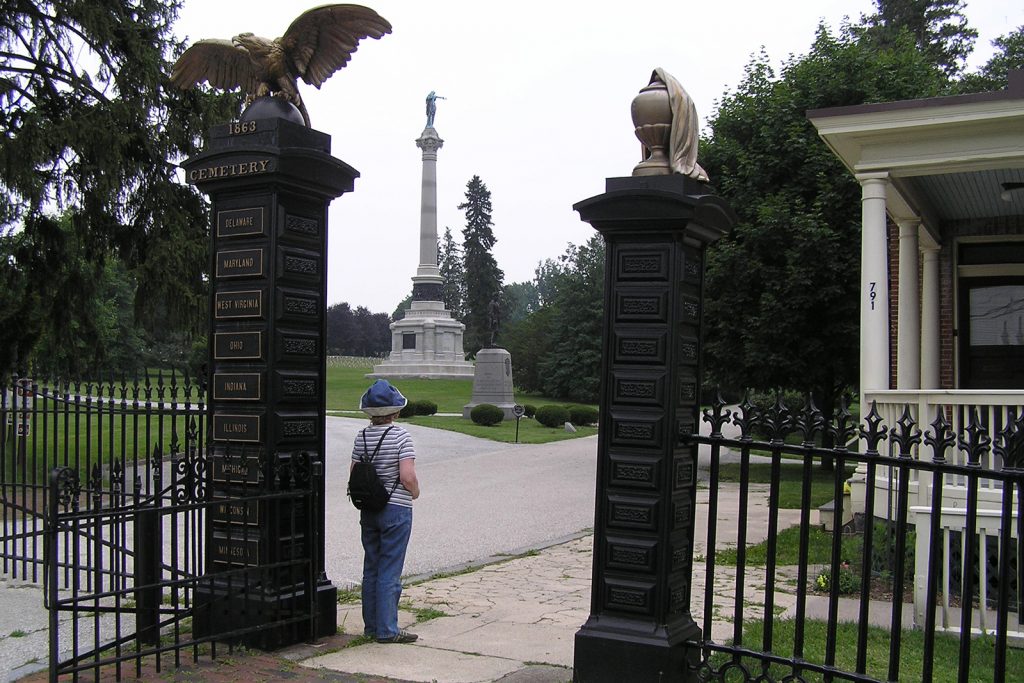 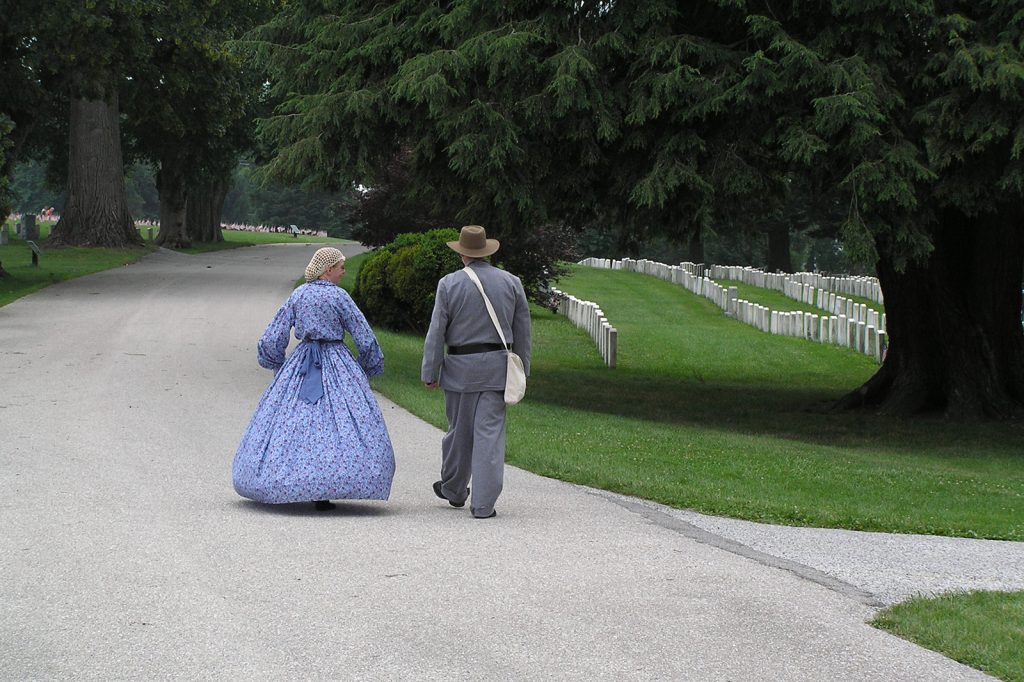 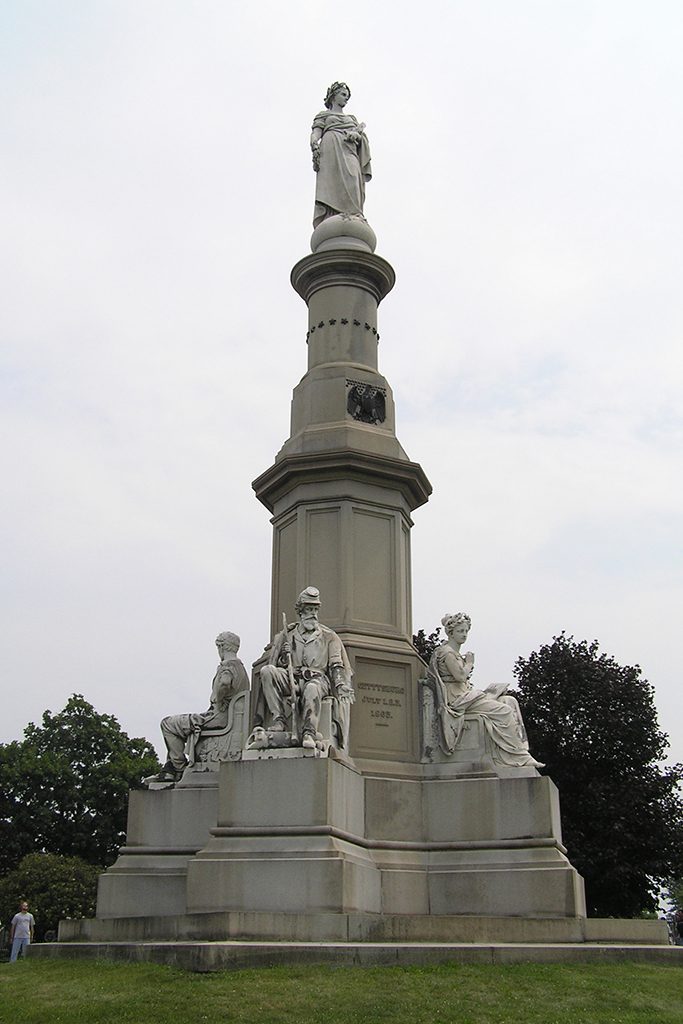 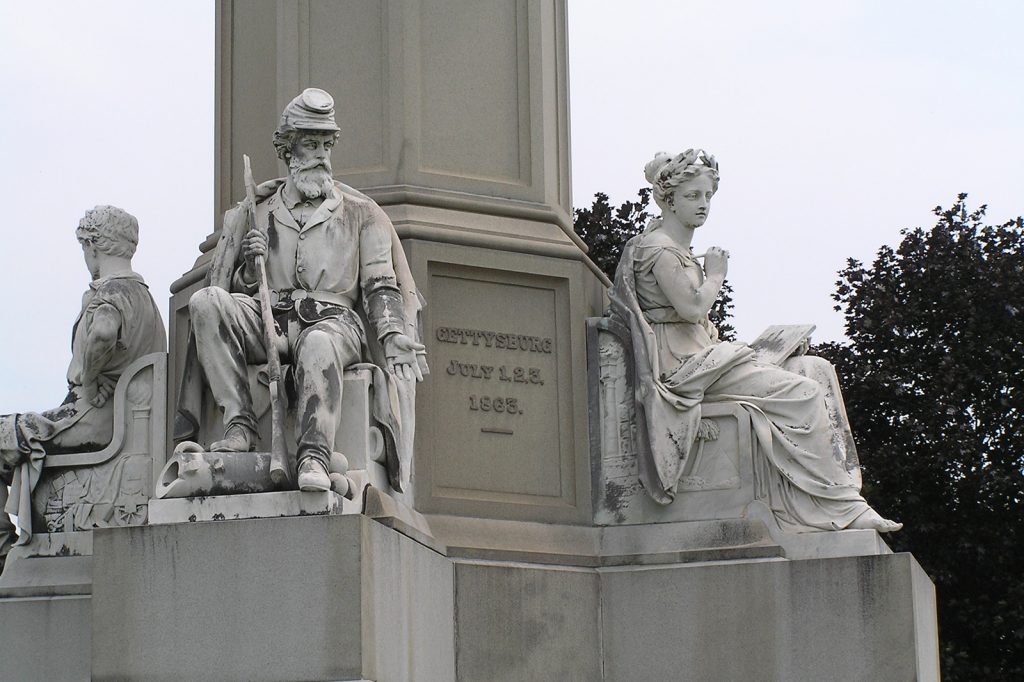 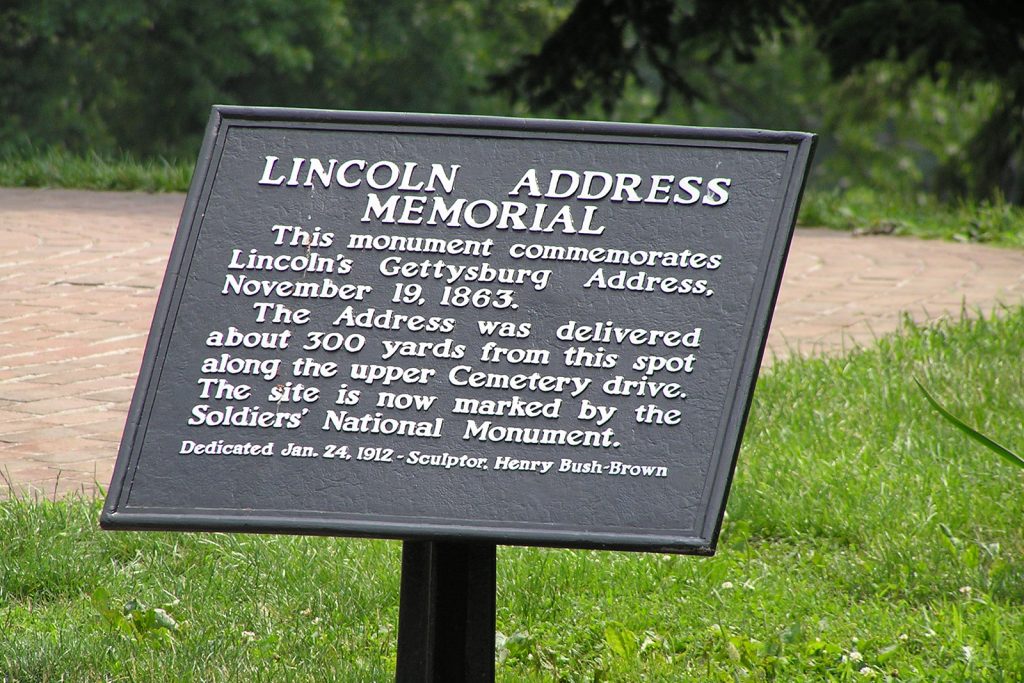 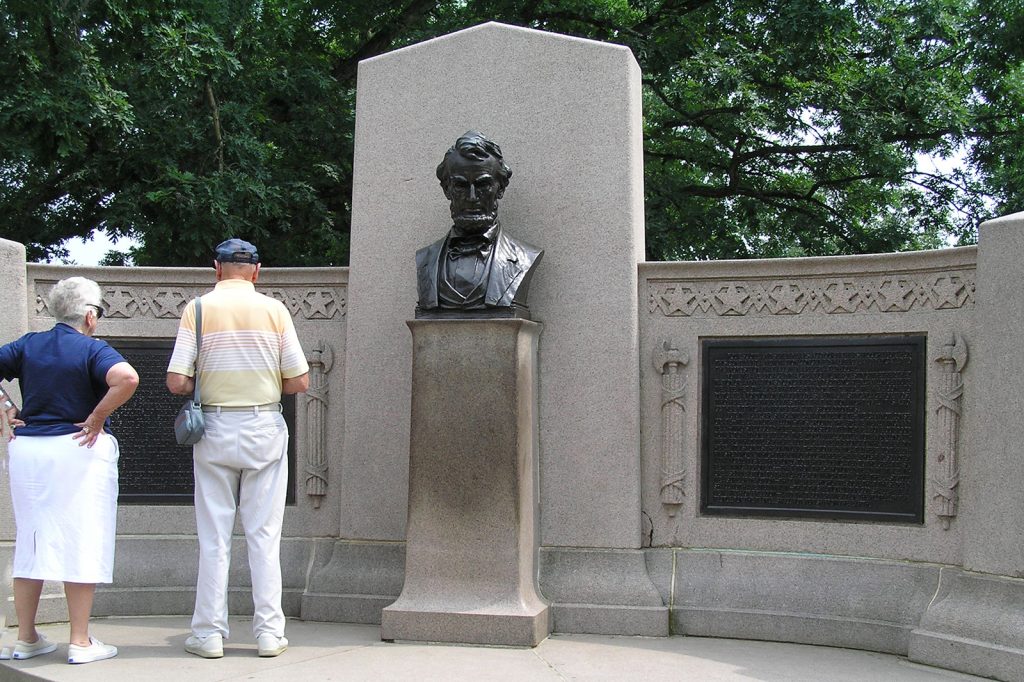 Inscription: In memory of Major-General John Buford, comdg 1st Div. Cav. Corps, Army of the Potomac, who with the first inspiration of a cavalry officer selected this battlefield July 1st 1863.
Reverse: From this crest was fired the opening gun of the battle: one of the four cannons at the base of this memmorial.

Inscription: Led to this spot by his military sagacity, then Chief Engineer of the Army of the Potomac, detected General Hood’s flanking movement and, by promptly assuming the responsibilty of ordering troops to this place, saved the key of the Union position. Promoted for gallant services from the command of the regiment in 1863, through successive grades to the command of the 2nd Army Corps in 1863 and permanently assigned to that of the 5th Army in 1864. Major Warren needs no eulogy. His name is enshrined in the hearts of his countrymen.

(Taken from the storyboard The Deadly Sharpshooters)

Little Round Top’s large rocks and the stone breastwork thrown up during the battle, protected Union Soldiers here from Confederate sharpshooters in and around Devil’s Den across the valley. Also the rocks provided secure firing positions for the Union sharpshooters.

A Civil War sharpshooter, using a rifle equipped with a scope, could kill an enemy soldier at 1,000 yards. The Confederate sharpshooters at Devil’s Den were only 500 yards from here.

Union sharpshooters and infantry crept on hands and knees to avoid flying lead. For officers it was more difficult to keep down. Brig.Gen. Stephen H, Weed, commander of the second Union brigade to arrive on the scene, fell mortally wounded by a sharpshooter’s bullet here July 2. When Lt. Charles E. Hazlett, commander of  the cannon to your left, answered the call of the dying Weed, a bullet penetrated his brain and he fell dead in Weed’s lap.

Union sharpshooters positioned here, carried the accurate, breach-loading Sharps rifle. The Sharps could be loaded three times faster than a muzzle-loader, and with few motions, reducing the risk of exposure to enemy fire.

Regarded as the turning point in the battle and the “high water mark” of the Confederacy. Led by General George Pickett in what is now known as “Pickett’s Charge”, they were repulsed and in one hour 5,000 men were casualties.

The copse of trees behind this memorial was the landmark towards which Longstreet’s assault was directed. The bottom plaque reads:

The following States have contributed to erect this tablet.

This monument overlooks the scene of Pickett’s Charge. Seated on his horse Traveller is General Robert E Lee and a sign tells us that the figures at the base represent the various types who left civil occupations to join the Confederate Army. From the left a professional man, a mechanic, an artist, a boy, a business man, a farmer, a youth. 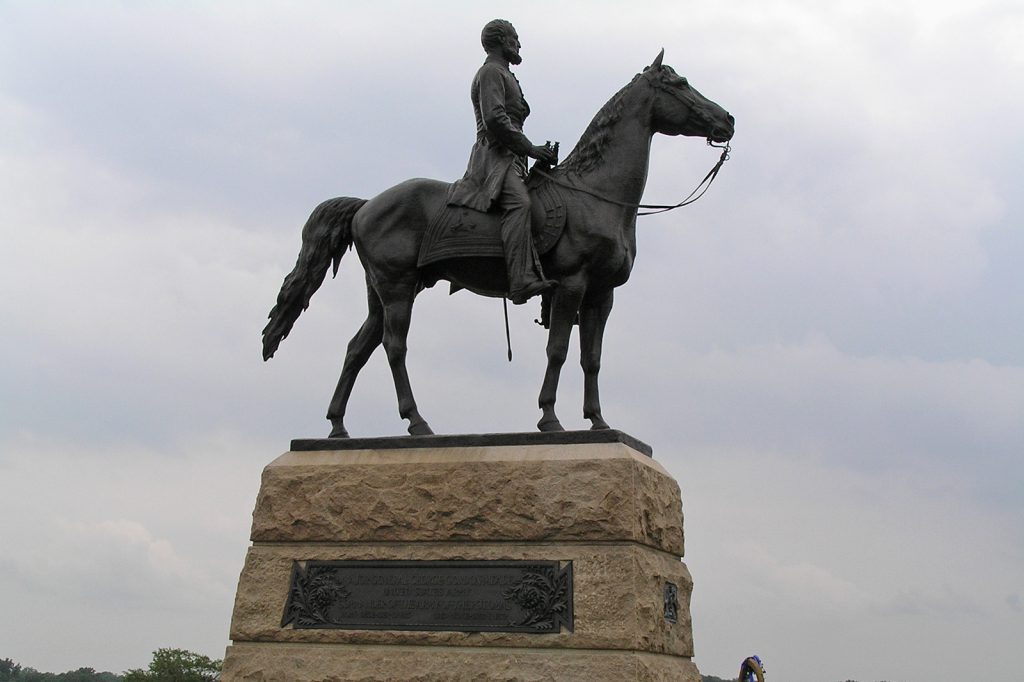 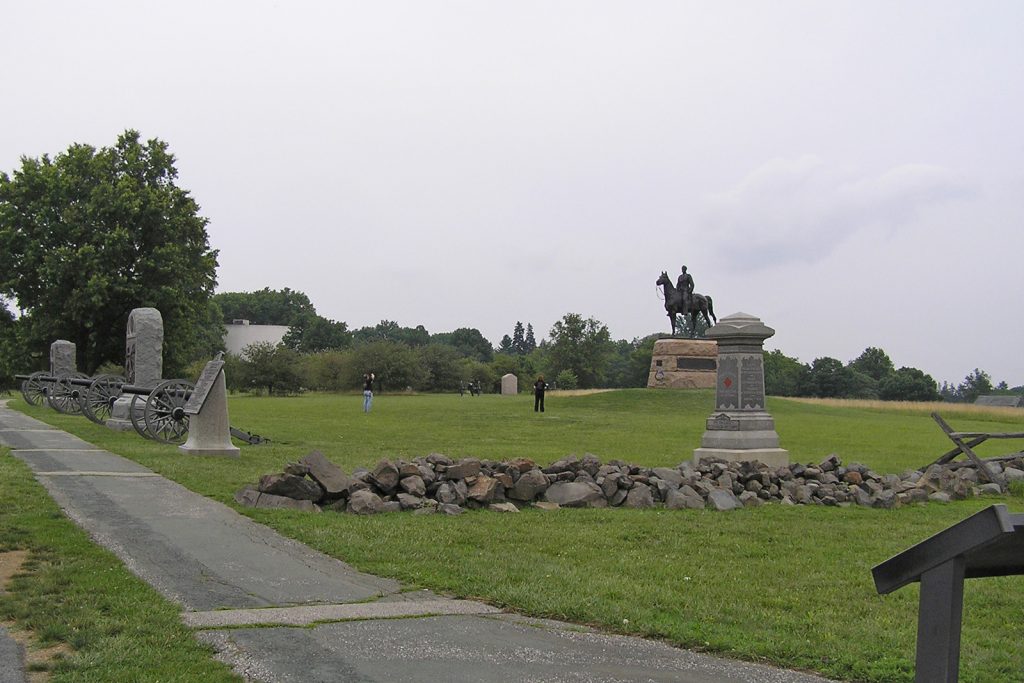 In addition (in part):

That the gratitude of the American people and the thanks of their American representatives in Congress are hereby rendered to Major-General George G Meade and the officers and soldiers of that army (Army of the Potomac) for the skill and heroic valor which at Gettysburg repulsed, defeated and drove back, broken and dispirited, beyond the Rappahannack, the veteran army of the Rebellion