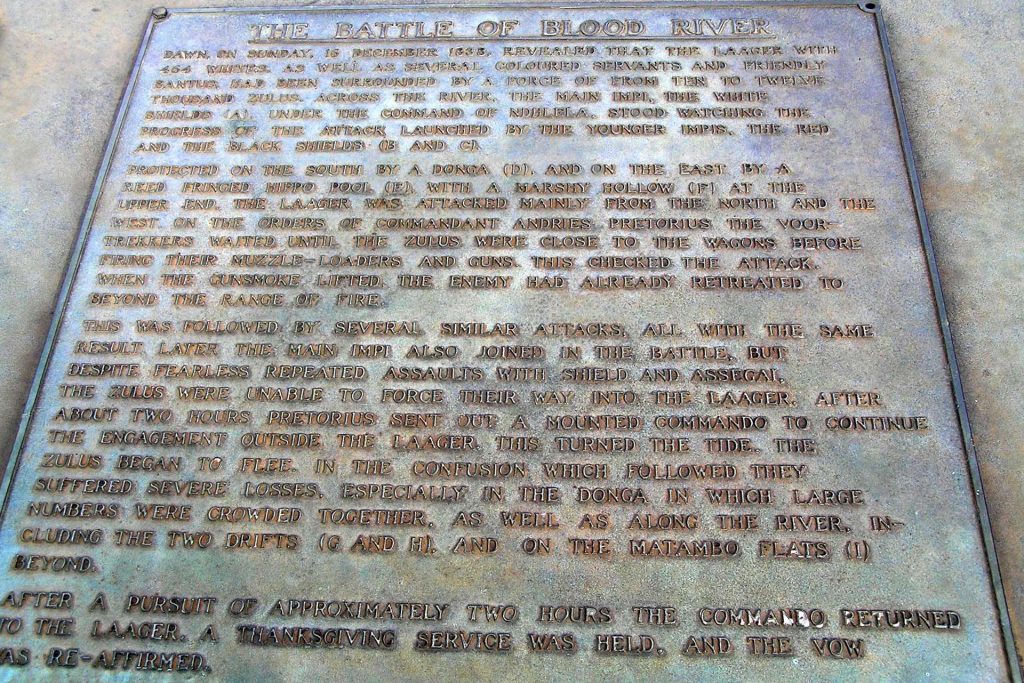 The words on this monument at Blood River tell the story of what happened here.

Dawn on Sunday 16 December 1838, revealed that this laager with 446 whites, as well as several coloured servants and friendly Bantus, had been surrounded by a force of from ten to twelve thousand Zulus. Across the river, the main Impi, the white shields, under the command of Ndhlela, stood watching the progress of the attack launched by the younger impis, the red and the black shields.

Protected on the south by a donga and on the east by a fringed hippo pool, with a marshy hollow at the upper end, the laager was attacked mainly from the north and the east. On the orders of Commandant Andries Pretorius, the Voortrekkers waited until the Zulus were close to the wagons before firing their muzzle-loaders and guns. This checked the attack and when the gun-smoke lifted, the enemy had already retreated to beyond the range of fire.

This was followed by several similar attacks, all with the same results. Later, the main impi also joined in the battle. But despite fearless repeated assaults with shield and assegai, the Zulus were unable to force their way into the laager. After about two hours, Pretorius sent out a mounted commando to continue the engagement outside the laager. This turned the tide. The Zulus began to flee.

In the confusion which followed, they suffered severe losses, especially in the donga in which large numbers were crowded together, as well as along the river, including the drifts and on the Matambo Flats beyond. After a pursuit of approximately two hours, the commando returned to the laager, a Thanksgiving service was held and the Vow re-affirmed.

An estimated 3,000 Zulus were killed.

The Vow was a promise that if God would give the Voortrekkers His protection they would pass this day and date each year as a day of thanksgiving and they would build a ‘temple to His honour’. This was built in Pietermaritzburg in 1841. The 16th December, formerly known as Dingaan’s Day, became a national holiday – The Day of the Covenant (1932) or the Day of the Vow. The name was changed to The Day of Reconciliation in 1994.

This battlefield features a spectacular laager of full-sized bronze wagons like the Boers would have been living in at the time of the battle against the Zulu at the Ncome River, near Dundee, Natal, 16 December 1838.

There is also a fascinating and well-presented Zulu Museum on the site. In our book we have transcribed the words of the Vow and the description plaques, and there are photos of other features.